Our work Projects Securing Registered Title to our Lands

Securing Registered Title to our Lands

Following the Community Land Act of 2016, Kenyan communities have worked towards formalizing their land rights. This project will contribute to conditions that allow for more sustainable land management, including security of tenure, stronger plans and institutions of land governance, negotiation of land-sharing agreements and mediation of conflicts between communities.

Beneficiaries: An estimated 940,000 people, men, women and children who comprise the members of 50 project partner communities and include representation of pastoralist communities (on trust lands and group ranches)
forest hunter-gatherer communities
settled communities
Indirectly the project could benefit 10 million pastoralists and agro-pastoralists seeking collective title
160,000 forest peoples who self-identify as Indigenous, and 50,000 members of fisher-farming communities

Around half of Kenya’s land area is thought to be community land. Through colonization, rights over communal land were subordinated to the interests of state and private rights. The process of land seizure, sub-division and selling continued in the post-colonial era, however in 2010 Kenya’s new constitution recognized ‘community land’ as a new classification equivalent to freehold. A process for registering this land was then laid down in the Community Land Act (CLA) of 2016.

The majority of the project’s partner communities live in arid regions and their traditional nomadic pastoralist and agro-pastoralist livelihoods are adapted to the unpredictability of this harsh environment.  However, land use transitions for conservation, mining,  energy projects  and  defense purposes have reduced access to land. These  changing  land  use  patterns  and  pressures have undermined traditional systems for sharing resources between communities, such as allowing transit and temporary grazing rights, resulting in increased competition and conflicts between communities. On-going conflicts have resulted in degradation of resources, and are perpetuated because communities lack access to information concerning their rights. Practical and progressive approaches are also lacking globally, and there is a lack of empowerment and negotiations with land-dependent communities.

To read a brief overview of Kenya, click here.

CLAN is a communal land network comprising a network of more than 40 community leaders and community-based organizations. CLAN is the first of its kind in Kenya being the only network of community leaders  (as opposed to a network of NGOs and INGOs) and thus is uniquely placed to bring grassroots voices to county and national policy and law-making levels.

The project’s partner communities are located in 17 of Kenya’s 47 counties, representing  the  majority  which  have  significant  areas  of  community  land  holdings and are representative of the full range of ecological zones. Thus the  project  aims  to  be relevant to the widest number of communities and county governments, and to have greater impact at national level.

By assisting communities to formalize their rights, the project will contribute to conditions that  allow  for  more  sustainable land management, including  security  of  tenure,  stronger  plans and institutions of land governance, negotiation of land-sharing agreements and mediation of conflicts between  communities. The project will also contribute to Kenya’s climate change efforts. By improving tenure security communities will be able  to  invest  in  more  sustainable  land management  practices,  reducing  soil  degradation  and  forest  loss, while  increasing  the  resilience  of communities to extreme weather events and long-term change. The project is also committed to promotion of gender equality through its constitution, including in its decision making bodies. 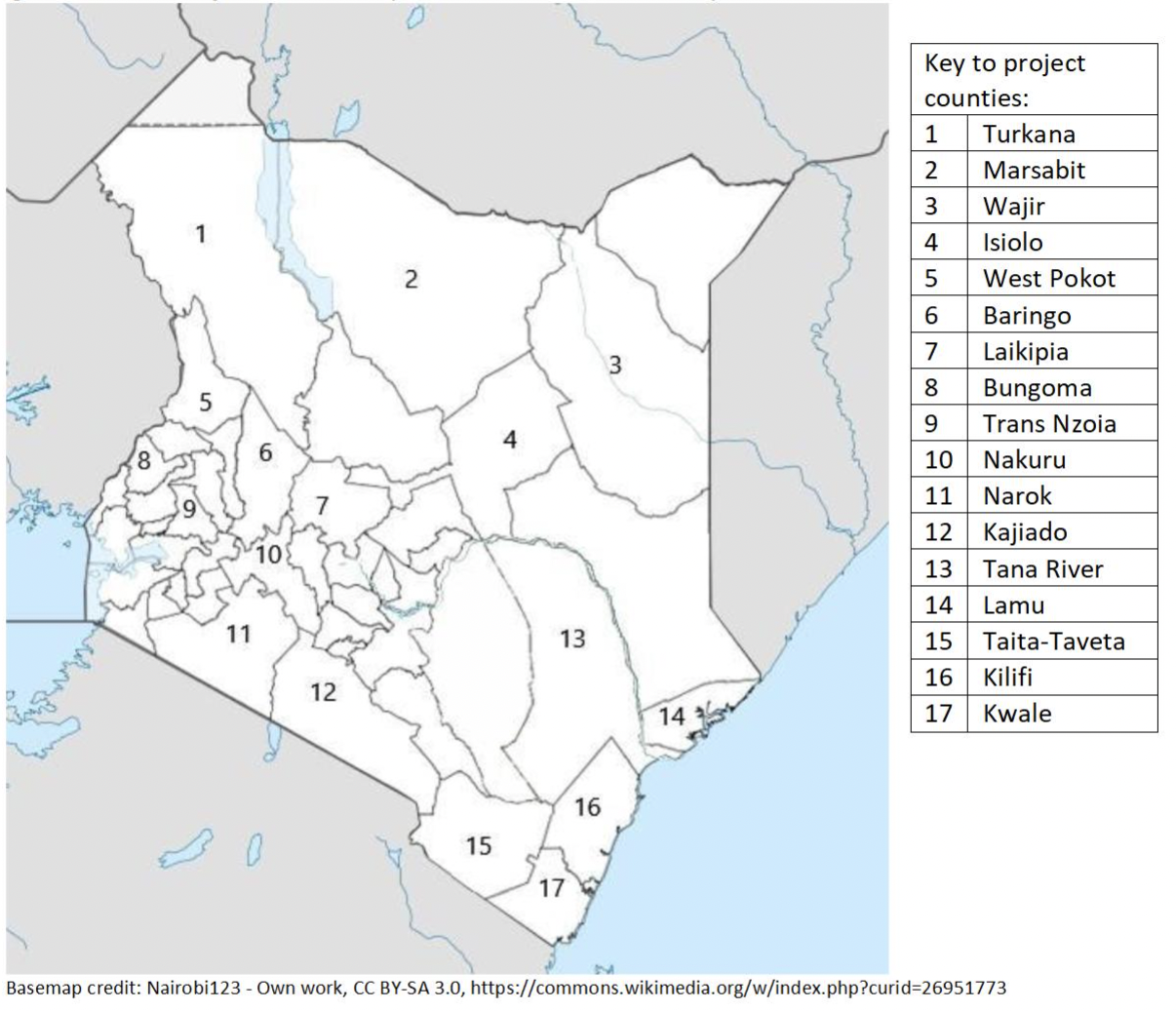 Location of partner communities within Kenya

The impact of this project includes that 50 communities will register and progress with land titling under the Community Land Act. The communities include pastoralists, agro-pastoralists, hunter-gatherers and settled communities in diverse geographic and ecological areas and a wealth of case studies and learning opportunities will be created. Pilot collaborative engagements between communities and Government Agencies and/or the private sector will demonstrate how progress can be made to resolve some existing difficulties on ancestral lands.