With Tenure Facility support in the Pilot Phase, Indigenous Peoples and local communities have advanced collective tenure security over almost 1.8 million hectares of land and forest and strengthened defence of an additional 800,000 hectares of forest categorised as a reserve for Indigenous Peoples living in voluntary isolation.

The Tenure Facility’s six pilot projects (summarised below) prove that, with funding and technical support, Indigenous Peoples’ and local communities’ organisations can achieve significant results in securing tenure rights in a short period of time. The pilots have also helped to improve the responsiveness and effectiveness of the Tenure Facility itself, generating valuable lessons for improving its operations and services.

Cameroon: NGOs advanced land tenure security by developing broad support for a standard methodology for participatory community mapping across different ecosystems and cultures—in 22 months. The methodology lays important groundwork for explicit recognition of community rights and reduction of land and resource conflicts in Cameroon as the country implements new land use planning. If scaled nationwide, the methodology could secure community rights over more than 5 million hectares within five years.

Indonesia: The Indigenous Peoples’ Alliance of the Archipelago (AMAN) advanced titling over 1.5 million hectares of land belonging to 450 indigenous communities and achieved recognition of 66,300 hectares—in 30 months. AMAN’s achievement set the stage for faster and more efficient recognition of Indigenous Peoples’ rights to lands and forests by demonstrating how district legislation can fill policy gaps at the national level and build momentum for systemic changes in national tenure policies. In fact, their work has contributed to a bottom-up push for a national-level approach to Indigenous Peoples’ territorial rights (adat). Through peer-to-peer exchanges, they ignited a movement that is spreading from district to district as local authorities adopt the approach of using local legislation to secure Indigenous Peoples’ land and forest rights.

Liberia: A coalition of NGOs and the national land agency tested and refined a practical and scalable guideline to enable local communities to “self-identify”—in 21 months. Community self- identification is the first step in Liberia’s new Land Rights Policy and enables communities to gain collective title to their customary land. This project also built trust between NGOs and national government and enhanced the capacities of both for implementing the guideline nationwide. 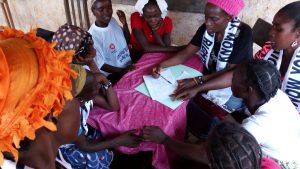 Mali: The National Association of Peasant Organizations (CNOP) and HELVETAS MALI strengthened the capacity of 17 local land commissions to resolve conflicts over land and resources in communities located far from the nation’s capital—in 22 months. Participating village land commissions reduced conflict by 35 percent and participating municipalities by 25 percent. The project contributed to achievement of the 2017 Peace Accords by pioneering, testing and demonstrating scalable approaches and tools that rural municipalities and local communities can use to resolve conflicts among themselves and with government, investors, immigrants and settlers. The pilot sets the stage for scaling the success of land commissions across the country. By supporting and learning from the experiences of land commissions in the south, where conflict is more localised, the learning can be scaled to areas where conflict is more prevalent and widespread, particularly in the north.

Panama: The National Coordinating Body of Indigenous Peoples in Panama (COONAPIP) advanced titling of 223,500 hectares in four territories and resolved 18 tenure conflicts over 1,200 hectares—in 20 months. COONAPIP, a national association of indigenous organisations, also trained more than 250 people in indigenous rights and law, built its own capacity for tenure implementation and established a course on indigenous rights at the University of Panama’s Faculty of Law. The pilot built momentum for faster and more efficient titling by raising awareness of Indigenous Peoples ́ rights among government authorities, building relationships among relevant institutions and increasing the confidence of Indigenous Peoples in their power to effect change.

Peru: The Native Federation of the River Madre de Dios and Tributaries (FENAMAD) and the Peruvian Society for Environmental Law (SPDA) secured titles for five indigenous communities covering 60,000 hectares and signed an agreement with the Ministry of Culture that strengthens systems for protecting peoples in voluntary isolation in the Madre de Dios Territorial Reserve, which covers more than 800,000 hectares—in 18 months. FENAMAD, SPDA, and the Regional Government of Madre de Dios tested a unique partnership between an indigenous federation, an NGO, and a regional government that can be scaled to resolve longstanding conflicts over land tenure and implementation problems throughout the country.