“No vaccination against deforestation”: deep challenges for Indigenous Peoples and local communities, but hope remains

From despair to hope, abandonment to solidarity, 2020 was a year of extremes for Indigenous Peoples and local communities. This article, taken from the Tenure Facility's Annual Report 2020, aims to capture the highs and lows of a tumultuous period, and put global events in the context of the wider struggle to support living forests and thriving communities.

The upheaval of 2020 not only created tremendous social and economic challenges for Indigenous Peoples and local communities, it also highlighted that historic injustices and inequalities remain grimly relevant today, and that progress towards stronger protections for these communities and the forests they safeguard remain fragile and reversible.

Despite this, significant bright spots remain, not least the growing recognition of the vital role played by Indigenous Peoples and local communities in their roles as guardians of the world’s forests, in everything from climate change mitigation, biodiversity protection and even pandemic risk reduction.

Largely abandoned by states, Indigenous Peoples and local communities have had limited or non-existent access to even the most basic healthcare and information with which to keep themselves safe. This same neglect also means that governments have collected little reliable data on the impact of the pandemic on these communities.

Despite this, anecdotal reporting globally and a ground-breaking COVID database collecting data on Indigenous Peoples in Peru suggest heavy losses in some indigenous communities, particularly among older generations. These are the keepers of traditional knowledge, living libraries of indigenous culture. As one Indigenous man in Brazil told Reuters, “the identity of our people is shattered. Our people saw our libraries break.”

The global lockdown has had alarmingly diverse negative impacts on Indigenous Peoples, many of whom were already badly exposed by systemic injustice, according to the United Nations’ Special Rapporteur on the Rights of Indigenous Peoples, Jose Francisco Cali Tzay.

“I am receiving more reports every day from all corners of the globe about how indigenous communities are affected by the COVID-19 pandemic, and it deeply worries me to see it is not always about health issues,” he stated.

"Social and environmental laws, regulations and safeguards have been weakened, purportedly in the name of economic continuity and recovery... As some put it, harmful business as usual, but this time on steroids," 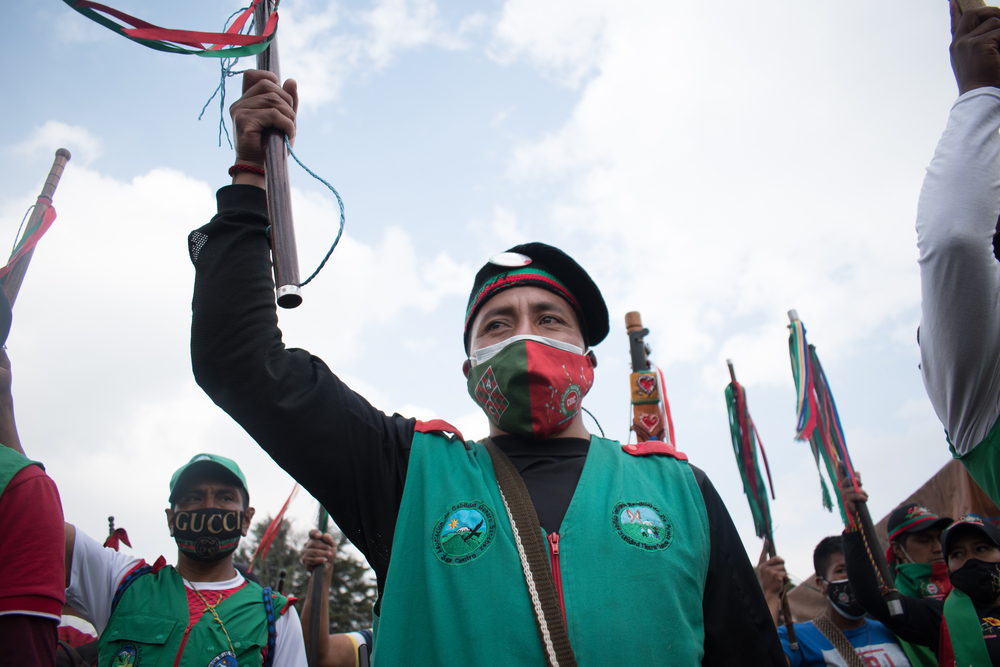 Local economies have contracted sharply, informal sectors where many Indigenous People work have seen massive lay-offs. The demand for indigenous and forest-based produce has plummeted, as has the ability of remote communities to access markets. Tourism revenue has dried up and food insecurity has risen.

In Liberia – well used to the devastating impacts of disease after recent Ebola outbreaks – civil society reported medicine and food shortages linked to lockdowns in rural communities, as well as a spike in gender-based violence.

In many countries the retreat of the state has created space for a surge in criminality, incursions onto indigenous territories, land-grabs, attacks and killings.

“If we don’t stand before the world and say ‘this is happening,’ we will be exterminated,” Ermes Pete, an indigenous leader, told the New York Times from the streets of the Colombian capital Bogota in October. He and thousands more had travelled from remote indigenous communities to protest against an upsurge in violence across the country, with Indigenous Peoples bearing the brunt of it.

Worldwide, an estimated 330 environmental defenders were killed in 2020, according to a report by Front Line Defenders, most of them as they attempted to stand up for territorial, environmental and indigenous rights.

It is not just environmental defenders who have faced mounting risks – the lands they defend are increasingly exposed to regulatory rollbacks, according to a to new study by the Forest People’s Programme (FPP), Middlesex University, and the Lowenstein International Human Rights Clinic of Yale Law School.

“Social and environmental laws, regulations and safeguards have been weakened, purportedly in the name of economic continuity and recovery,” said Cathal Doyle, one the study’s authors and a senior lecturer at Middlesex University School of Law.

Doyle said that the pandemic had intensified the assault on indigenous territories in some of the world’s most densely forested nations. “As some put it, harmful business as usual, but this time on steroids,” he added.

"We have witnessed that where there is community, solidarity in diversity, and respect for our planet, there is hope. And hope is the one thing we can´t lose." 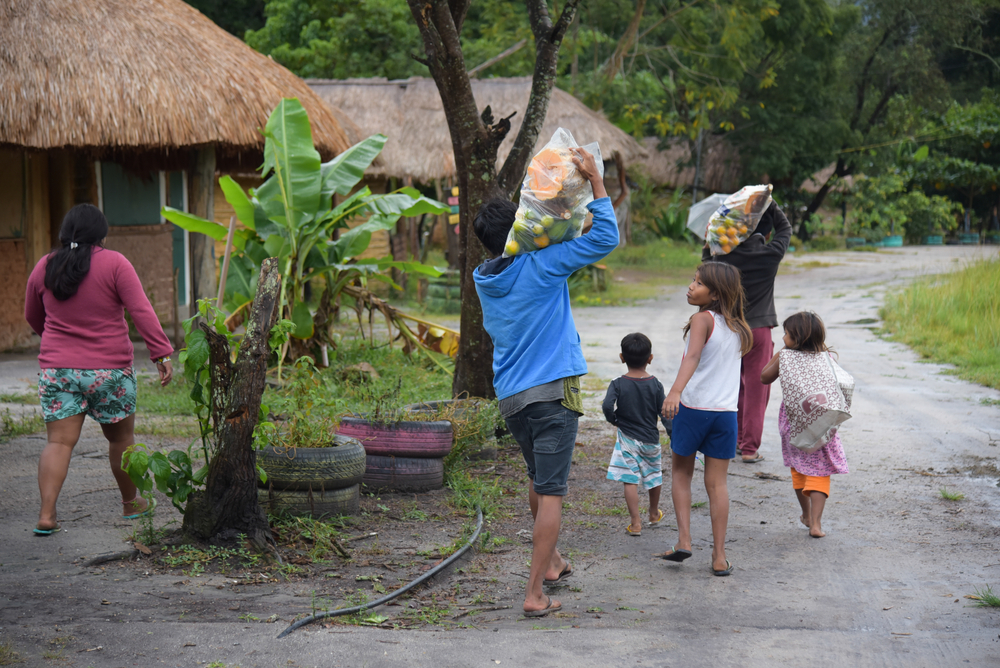 The figures back this up: early hopes that global lockdowns would slow the rate at which humans are destroying the natural world proved misguided – 12.2 million hectares of trees were lost during 2020, with 4.2 million hectares – the size of the Netherlands – in humid tropical primary forest, according to the Global Forest Review. It was the third highest global annual rate of deforestation since the turn of the century.

Brazil’s space agency noted that deforestation in the country was at a 12-year high between August 2019 and June 2020, up nearly 10% on the previous year. A total of 11,088km2 – an area larger than Lebanon – was destroyed.

In the Brazilian Pantanal, the world’s largest wetlands, fires reportedly started on private lands spread to indigenous territories, cutting off communities, razing villages and choking the air with dangerous smoke. Half of the region’s Indigenous territories were negatively affected.

Quite apart from the climate and biodiversity implications of these global forest losses, experts have increasingly warned that humanity’s broken relationship with nature is fuelling the rise of zoonotic disease – illness that jumps species from animals to humans.

Researchers are increasingly recognising the significance of legally secured indigenous territories as tools to mitigate climate change and biodiversity loss, as well as offering buffers to reduce zoonotic disease spill-over in a cost-effective manner. Still, change remains far too slow.

“If we don’t die from COVID, we will die from our forests being destroyed,” said Celia Xakriaba, an activist and educator of the Xakriaba People in Brazil, during a Tenure Facility supported webinar.

“What will humanity do? There is no vaccination against deforestation.”

Xakriaba is one of many indigenous voices calling for their culture, rights and territories to be respected. They are increasingly making themselves heard.

Indeed, in a deeply difficult and sometimes depressing year for the advancement and protection of indigenous land rights, there were positive signs reflecting the growing awareness that Indigenous Peoples and local communities must be at the heart of efforts to build a more sustainable means of existence for humanity.

A young Waorani woman, Nemonte Nenquimo, was featured in the Time Magazine 100 list of global influencers, for championing the defence of her peoples’ territories against state-backed oil extraction.

In Panama, a decades-long fight by the Naso People – supported by the Tenure Facility’s partners – to have their rights recognised culminated in a supreme court victory in December, securing a path to the creation of their own administrative territory.

In the Democratic Republic of Congo, lawmakers in June 2020 passed a law paving the way for the recognition and safeguarding of indigenous rights – the result of a long struggle by the Batwa People, who have been and remain the target of exclusion, discrimination and targeted violence. The murders in early 2021 of 46 pygmies in the east of the country were a reminder however that new laws alone cannot reverse generations of brutality.

In India, a study showed that communities enjoying secure tenure and strengthened local governance under the so-called “Gram Sabha” system fared better than other rural communities in their responses to the pandemic.

“The study depicts grass-roots governance of common land and resources as an effective way for communities to take some control over their own destinies, particularly during a moment of crisis,” a group of experts wrote in a blog for the Tenure Facility website, analysing the study.

These apparent successes are not only a vindication of the importance of tenure security for supporting resilience in Indigenous and local communities, they also add to growing political momentum on the issue of communal land and forest rights in India.

“While India’s indigenous and forest-dwelling populations continue to be marginalised, the political discourse around the issue of forest rights has gained momentum in the last few years,” the experts noted.

In Indonesia, an ongoing Youth Homecoming Movement to encourage younger generations of Indigenous People back from the cities to their villages has been given an unexpected boost by the pandemic lockdown. Already there are 55 indigenous schools dotted across the country, ensuring that traditional knowledge is passed on. Meanwhile deforestation rates across Indonesia were down for the fourth year in a row according to the World Resources Institute – with the strengthening of communal land-use rights being identified as one of a number of successful strategies deployed by the government and NGOs.

Less heralded, but perhaps equally significant, were the smaller acts of solidarity, resilience and resourcefulness enacted by Indigenous Peoples, local communities, and their representative organisations throughout the pandemic – from developing new work practices and supporting public health initiatives, to helping the most vulnerable through the crisis, and evolving new approaches to ensure food security.

“2020 will be remembered for revealing an even more urgent need to remedy the longstanding inequities that contribute to vulnerability for too many people,” said Nonette Royo, Executive Director of the Tenure Facility, “but also for confirming the importance of reconnecting with Nature and the key role that Indigenous Peoples have protecting our planet. We have witnessed that where there is community, solidarity in diversity, and respect for our planet, there is hope. And hope is the one thing we can´t lose.”