For much of the COVID-19 pandemic, the plight of indigenous communities around the world has been largely invisible, due to scant information filtering through from remote communities, and a lack of engagement from states.

In the Loreto and Madre de Dios regions of Peru, Indigenous Peoples have been working to counter this, creating an interactive database and online portal mapping the spread of the virus, and providing vital data to better understand the impact of the pandemic on indigenous populations.

The Indigenous Data Platform is a coordinated effort between the indigenous organisations of both regions, with collaboration from the Peruvian Society of Environmental Law (SPDA), the Tenure Facility’s implementing partner in the country. The database, the first of its kind, compiles information crucial for planning a response to the pandemic in areas which have traditionally been little understood or supported by central government: data including population size, the proximity (if at all) of local health facilities, case numbers, as well as the education levels, ethnic makeup and local languages of communities. The database also allows users to view information by territory or district, analysing infection spread in relation to virus rates in urban centres – where more comprehensive data has been collected since early in the pandemic.

"The purpose is to ask the state to implement health care infrastructure, especially in the most remote places, so that if there is another pandemic, we will not face the same levels of emergency,"

- Jorge Perez, president of the Regional Organization of the Indigenous Peoples of the East (Orpio) 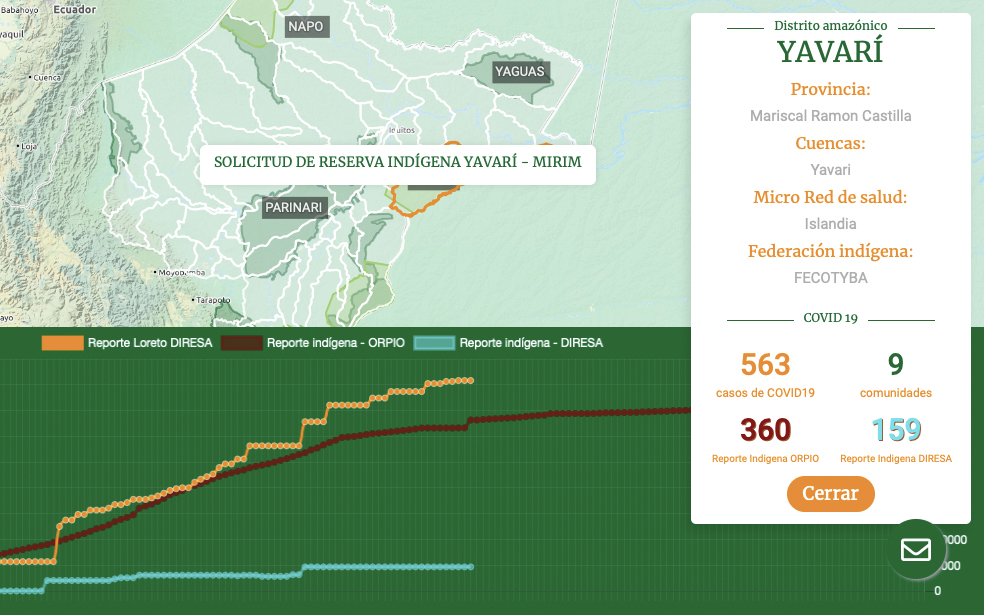 Whilst the portal itself is a slickly presented webpage, the data on which it is founded could only have been collected with the collaboration of indigenous groups and leaders across the territory, who provide regular update on case numbers from their communities. Not only is it hoped that the database can help lead to a more informed and effective response by the authorities to the pandemic, it is also supposed to highlight the stark deficiencies faced by many of these populations, who often lack even the most basic access to healthcare.

“The purpose is to ask the state to implement health care infrastructure, especially in the most remote places, so that if there is another pandemic, we will not face the same levels of emergency,” said Jorge Perez, president of the Regional Organization of the Indigenous Peoples of the East (Orpio), another Tenure Facility partner.

“The information that feeds the platform comes from the original source, it is information that we have gathered with the help of indigenous leaders and people in the communities,” Perez added.

This is just the latest example of the resilience shown by indigenous organisations and the communities they represent during the pandemic: last year SPDA hosted remote training for indigenous reporters, to give them the skills to be able to report on pandemic realities from their communities. In Indonesia the Tenure Facility’s partners coordinated food stockpiling and distribution, providing vital supplies for those without enough to eat, and long-term coping strategies for indigenous populations as the crisis has dragged on. In Mozambique and Mali, the Tenure Facility’s partners have worked with local authorities to spread public health messaging, as well as providing vital medical and protective supplies.

Despite this, the situation for many Indigenous communities remains bleak. Economies have been shattered, elders have died from the disease, and the absence of state authority in many areas has seen surging incursions into indigenous territories, and violence against indigenous populations.