Stories Articles Getting it done during Climate Week 2022

Getting it done during Climate Week 2022

Header photo provided by If Not Us Then Who?/ Eric Terena

As world leaders met for the opening of the United Nations General Assembly, indigenous leaders and civil society groups convened nearby for their own discussions about the state of global affairs.

They broached questions like how to halt rising deforestation, abolish gender inequality, or strengthen community leadership during the week-long gathering in New York City.

“I have traveled to New York City with a simple message for world leaders,” said Nemonte Nenquimo, an indigenous leader and member of the Waorani Nation from the Ecuadorean Amazon. “Our task as human beings is not to save Mother Earth, but to learn to repect her.”

The talks were part of Climate Week NYC, an annual platform that brings together leaders from civil society, businesses, and governments to promote and discuss global climate action. “Getting it Done” was the theme of this year’s event which embodied the urgent need for action on climate change.

Much like indigenous communities, one group disproportionately affected by climate change is women. They are more like to suffer the negative impacts of it and are underrepresented in environmental decision making. For example, at last year’s UN COP26 climate summit less than 10 percent of the heads of delegations were women.

Sessions included talks on what progress is being made towards the 2030 Global Forest Goals. Eleanor Glass/The Tenure Facility

However, women, especially those from indigenous communities, are key agents for change and can help lead the way on surviving the climate crisis. What remains is enabling that action and scaling it up. And that point was the focus of a panel put on by the US newspaper The New York Times “How Can Women’s Climate Leadership Have the Biggest Impact?”

“The men are there but the women have a different force when they band together,” said Nonette Royo, Executive Director of the Tenure Facility, who served as a panelist during the seminar. “A big part of their concerns is securing homes, securing communities, and securing what enables them to survive. And that really hits at the core of all social movements.”

Royo cited examples from Liberia and Indonesia, two countries where the Tenure Facility has supported projects to secure indigenous tenure rights, of how women’s participation is making an impact. In Liberia, land management work led by women has replanted up to 600,000 hectares of forest in their territories while in Indonesia indigenous women groups and farmer organizations have banded together to reforest the boundaries of their community. 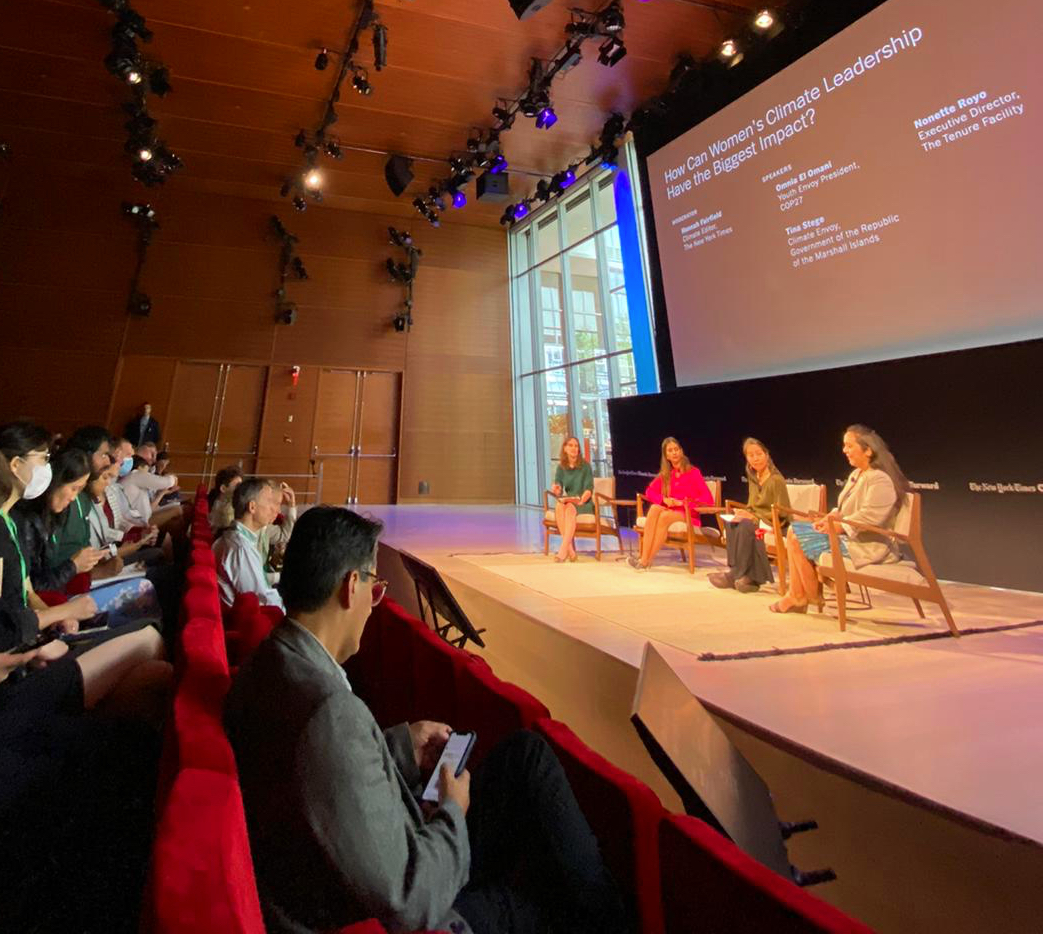 A panel discussion on how women's leadership can have the greatest impact on addressing climate change. Eleanor Glass/The Tenure Facility

Another topic raised at seminars during the week was representation for indigenous communities whose knowledge and experience has long been brushed aside in conversations about how to fix the climate. In New York, Indigenous Peoples sought to shift the focus from governments and businesses by organising their own discussions, staging protests and presenting new initiatives that highlight their skills and capabilities.

For example, Climate Week 2022 served as the launchpad for Shandia, a funding initiative from the Global Alliance of Territorial Communities that would raise funds from public and private donors and give them directly to Indigenous organizations. The financial support would be managed and allocated only by Indigenous Peoples to better protect their lands.

The Tenure Facility’s Nonette Royo said representation is also about raising the profile of indigenous leaders, especially when it comes to deciding matters on land rights.