Join the event co-organised by Sida, The Tenure Facility, SwedBio, The Rights and Resource Initiative, and the Focali-SIANI Dialogue Forum on June 1st and listen to voices from the ground sharing their experience and knowledge in safeguarding the world's forests, ecosystems and biodiversity. 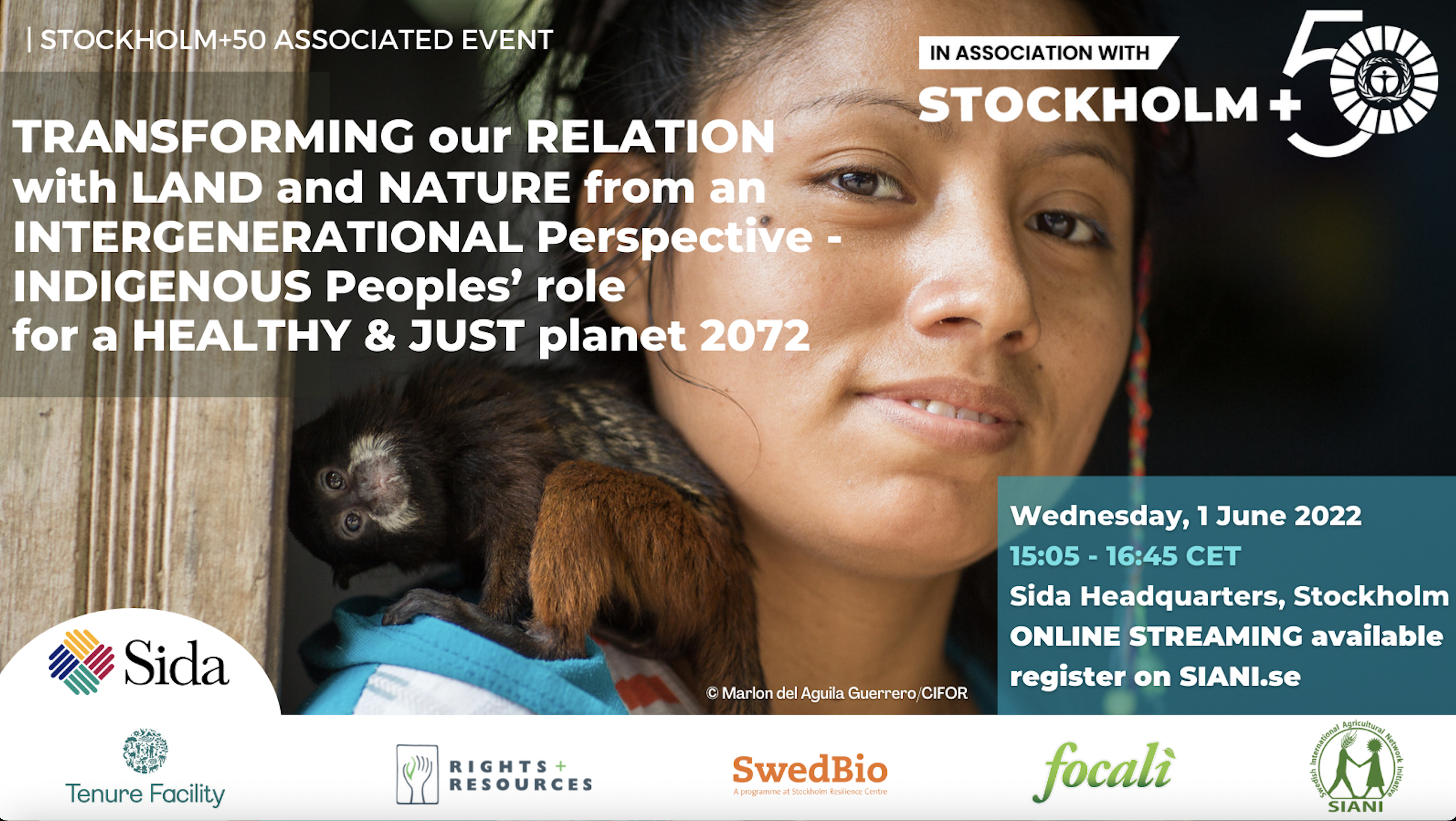 This event aims to highlight the role and importance of Indigenous peoples and local communities (IPLCs) in safeguarding the world’s forests, ecosystems and biodiversity. Secure tenure and human rights are key in this but remains a struggle to uphold.

A diverse panel will explore how support for Indigenous and community land rights and agency can accelerate global transformation towards a more just, resilient, and sustainable future, and what different actors can do to make this happen.

More information about the program and speakers bios to come.

This event is part of the A Day at Sida event, which takes place during the whole day of the 1st of June, 2022.

The speakers in detail Nemonte Nenquimo is an Indigenous Waorani leader committed to defending her ancestral territory and her people’s survival in the Amazon rainforest. Raised in the traditional community of Nemonpare in the Pastaza region of the Ecuadorian Amazon, Nenquimo co-founded the Indigenous-led nonprofit organization Ceibo Alliance in 2014 to protect Indigenous lands and livelihoods from resource extraction alongside its sister organization, Amazon Frontlines. In 2018, she was elected the first female president of OWAP, the Waorani organization of Pastaza province. Nemonte led her people to a historic legal victory against the Ecuadorian government, which protected half-a-million acres of primary rainforest in the Amazon from oil drilling and set a precedent for Indigenous rights across the region. Today, Nemonte is fighting to ensure the safety of her people amid the dual threats of COVID-19 and the ongoing ecological crisis in the Amazon. Nemonte is winner of the 2020 Goldman Environmental Prize for Central and South America and the United Nations’ Champions of the Earth Award. She was also named to the BBC’s 100 Women of 2020 and TIME 100 list of the most influential people in the world. Anoshka Violeta Irey Cameno is an indigenous leader of theHarabukt people of Madre de Dios in the Peruvian Amazon. She lives in the community of Masenawa in Peru and is a council member of FENAMAD – a regional federation that represents the 37 indigenous communities of the Madre de Dios river basin – and it is affiliated to the national-level indigenous organisation AIDESEP. Anoshka is strongly committed to promote the rights of indigenous women, the consolidation and protection ofz traditional territories, and the defence of the rights of indigenous peoples who live in voluntary isolation and in initial contact in remote areas of the Amazon. Archana Soreng belongs to the Khadia Tribe from Odisha, India. She is one of the seven members of the United Nations Secretary General’s Youth Advisory Group on Climate Change. She is experienced in advocacy and research and is working to document, preserve, and promote traditional knowledge and cultural practices of indigenous communities. Archana is one of the member of Indigenous Solidarity Working Group of YOUNGO (the official Children and Youth Constituency of UNFCCC). She works as Research Officer with Vasundhara, Odisha, an action, research and policy advocacy organization working on the rights of Indigenous Peoples, biodiversity conservation, sustainable livelihood and climate action in India. Since last year, she is one of the Board Member of Land Rights Now, an international alliance campaign to secure Indigenous and community land rights globally. Archana holds a Masters in Regulatory Governance from the Tata Institute of Social Sciences, Mumbai. Joan Carling, Global Director, The Indigenous Peoples Rights International (IPRI). Joan is an Indigenous activist from the Cordillera. Her expertise includes areas like human rights, sustainable development, the environment, climate change, and additionally the application of Free, Prior and Informed Consent. She was the General Secretary of the Asia Indigenous People Pact (AIPP) From September 2008 to December 2016. She was appointed as Indigenous expert of the Permanent Forum on Indigenous Issues (2014-2016) by the United Nations Economic and Social Council. Dr. Solange Bandiaky-Badji is Coordinator of the Rights and Resources Initiative (RRI), a global coalition of over 150 organizations advancing the rights of Indigenous Peoples, local communities, and Afro-descendant Peoples. She also serves as President of the Rights and Resources Group, the nonprofit coordinating body of the coalition based in Washington, DC. Bandiaky-Badji previously led RRI’s strategy for engagement in Africa with a focus on tenure rights reform. She built synergies around new strategic analyses, giving local and global actors a more strategic understanding of trends, issues, options, and gender in Africa. She also spearheaded RRI’s Gender Justice thematic program and ensured the implementation of a global gender strategy on women’s tenure rights. Before RRI, she was with PartnersGlobal, where she led programs on access to justice, security sector reform, and peacebuilding. She has also worked as a regional expert on gender and climate change for the Africa Adaptation Programme (AAP) and the UNDP/ BDP Gender Team in New York. Bandiaky-Badji holds a PhD in Women’s and Gender Studies from Clark University, Massachusetts, and an MA in Environmental Sciences and in Philosophy from Cheikh Anta Diop University, Senegal. She has published and contributed extensively to research in relation to natural resource management, decentralization, local forest tenure reforms, and women’s participation in climate solutions and peacebuilding. Emma Norrstad Tickner is a programme manager for the global portfolio on land rights and sustainable use of natural resources at the Unit for Global Sustainable Economic Development at Sida. Emma has vast field experience working with land rights, natural resource management and environment/climate change in Mozambique, as a programme officer at the Swedish NGO We Effect. Before joining We Effect she worked for the Embassy of Sweden in Maputo. Emma holds a master in development studies from Uppsala University, Sweden.