The Strategic Advisory Group (SAG) of Cameroon’s pilot project endorsed on 16 March 2017 a standard methodology for participatory mapping and committed to mainstreaming the tool nationwide. The Group includes representatives of government ministries with responsibility for land tenure and natural resources, the National Institute of Cartography, the National Council of Traditional Chiefs, the Central Africa Network of Parliamentarians, international and national NGOs, research centers CIFOR and ICRAF, and associations representing forest, agriculture and mining industries. Group members believe the new methodology, tested with government agencies and communities in diverse ecological and cultural settings during the pilot, will help them avoid decisions that stir new conflicts, support conflict resolution, and reduce the high social and economic costs of conflict in Cameroon. 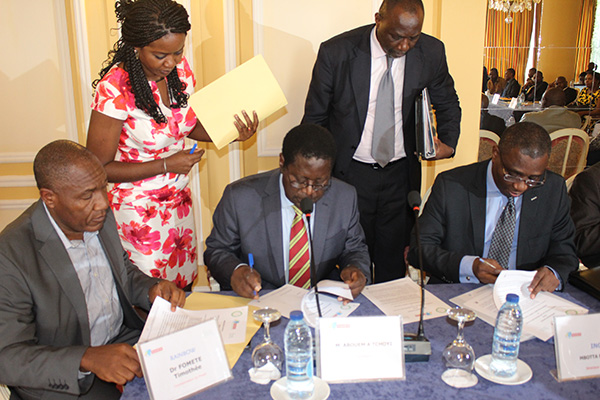 At the SAG meeting, the National Institute of Cartography signed a memorandum of understanding with the Tenure Facility pilot project team agreeing to archive, manage and provide access to community maps produced through the pilot project. The Institute’s endorsement and involvement gives more credibility to participatory maps developed through the new methodology and sets the stage for the Institute to store local maps for access and use by communities, government ministries, civil society and investors.

“We used to be isolated in our work,” said Georges Thierry Handja, RFUK’s mapping coordinator and participant in the pilot. “But through the pilot we were able to work with all the actors in Cameroon who were doing community mapping. The next maps we create will be produced in the way that the National Institute of Cartography and the ministries agree it should be done. This really gives a lot of weight to the maps.”

Cameroon’s National Program for Participatory Development plans to use the standard methodology when creating and updating municipal development plans. The methodology will also be used in Environmental and Social Impact Assessments, proceedings of Land Advisory Boards and several international initiatives. It could also be useful beyond Cameroon – in the Congo Basin, other regions in Africa, and perhaps Asia and Latin America.