Representatives of Black Communities’ Process (PCN) and the Tenure Facility signed an agreement on 1 August 2018 in Bogota officially launching an initiative that will resolve Afro-descendant peoples’ longstanding claims to their collective land and resources. The ground-breaking project is the Tenure Facility’s first in Colombia, and a first with Latin America’s Afro-descendant communities. The US$1,662,48 project aims to secure the rights of more than 1.5 million people over 2 million hectares, in two years

“The project is the breakthrough Afro-Colombians have been working toward for many decades,” said Jose Santos Caicedo of PCN. “It will change the lives of our Afro-descendant communities, position us to protect the environments upon which we depend, and contribute in a real way to creating conditions for a lasting peace by safeguarding of ethno-territorial rights as set out in the Ethnic Chapter of the Havana Peace Accord.” 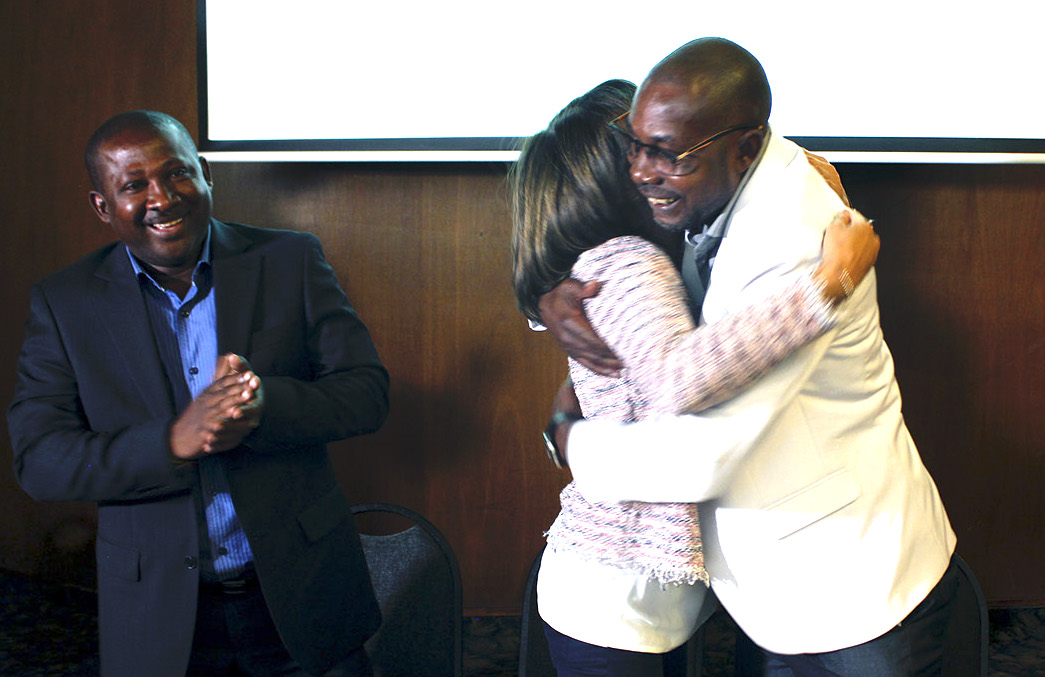 Richard Moreno, Deputy Attorney for Ethnic Affairs, at left, applauds as Elizabeth Gómez Sánchez, Secretary General of the National Land Agency, and José Santos Caicedo Cabezas of PCN hug after signing an agreement to work together.

Injustice over land and access to forests and other resources were major drivers behind the five-decade long armed conflict that was responsible for more than 200,000 deaths and displacement of 7 million people. The success of the peace process largely depends on how Colombia resolves longstanding grievances over land tenure and resource rights, particularly those of Afro-descendant and indigenous communities.

Colombia has the third largest concentration of Afro-descendant people in the Americas, after the USA and Brazil. According to Black Communities’ Process (PCN), they number 16 million, approximately one third of Colombia’s population. Indigenous Peoples and Afro-descendants, women in particular, experienced disproportionate levels of violence and displacement linked to Colombia’s internal armed conflict.

“The conditions are right in Colombia to overcome the land tenure injustice faced by both Afro-descendent and Indigenous Peoples,” said Arvind Khare of the Tenure Facility Support Project at the Rights and Resources Initiative (RRI). “By clarifying and consolidating land tenure security, we not only create the conditions for peace, but the conditions in which communities can improve their livelihoods, restore degraded forests, conserve biodiversity, reduce community vulnerability to climate change and contribute to its mitigation.

The initiative brings together the strengths of several organizations. PCN, a civil society organization dedicated to protecting the rights and cultures of Afro-descendant communities in Colombia, is leading the initiative. Partners include the Observatory for Ethnic and Peasant Territories (OTEC) at the Pontifical University of Javeriana, the National Land Agency (ANT), and the National Afro-Colombian Peace Association (CONPA). The Government’s Attorney General Lands Delegate for Agrarian Issues and Land Restitution is also behind the initiative.

PCN will contract legal, technical, social, and topographical experts to enable ANT to complete the collective titling process for 50 priority Community Councils. In addition, PCN will provide training along with organizational, political, technical, and legal support to 271 Community Councils to enable them to advance their claims for collective title to their lands. OTEC will update and improve its geographic information systems for recording, managing and validating spatial information on the lands and forests of Afro-descendent communities.

Astolfo Aramburo, leader of PCN and the initiative said the project scales up the work of many organizations over many decades.

“Thanks to the efforts of many people, and with cooperative support, a very significant advance was achieved in the recognition of the right to land⏤a historic moment that allowed for the titling of approximately 6 million hectares of land for black communities, almost all in the Pacific,” said Aramburo. “Today, with this event, we begin the second phase of a massive titling of collective lands for black communities. We will continue fighting for our territory as a space for life.”

The partners worked together in 2016 and 2017 to set the stage for the successful implementation of this project. They collected data on Afro-descendant land claims and established a geographic information system at the University’s Observatory for Ethnic and Peasant Territories (OTEC). They produced an analysis of the vulnerability of collective lands without legal recognition to overlapping claims with large-scale development projects. In addition, they set up a technical roundtable that identified and prioritized claims for resolution. Roundtable members included ANT, PCN, OTEC, RRI, and the Attorney General Delegate for Agrarian Issues and Land Restitution. The roundtable members identified several high-priority emblematic cases for titling that are located in politically or culturally significant regions. Resolution of the emblematic cases could establish new legal or political precedents, help to overcome significant legal obstacles or challenges, and provide symbols of achievement in Afro-descendant people’s long struggle for their land rights. 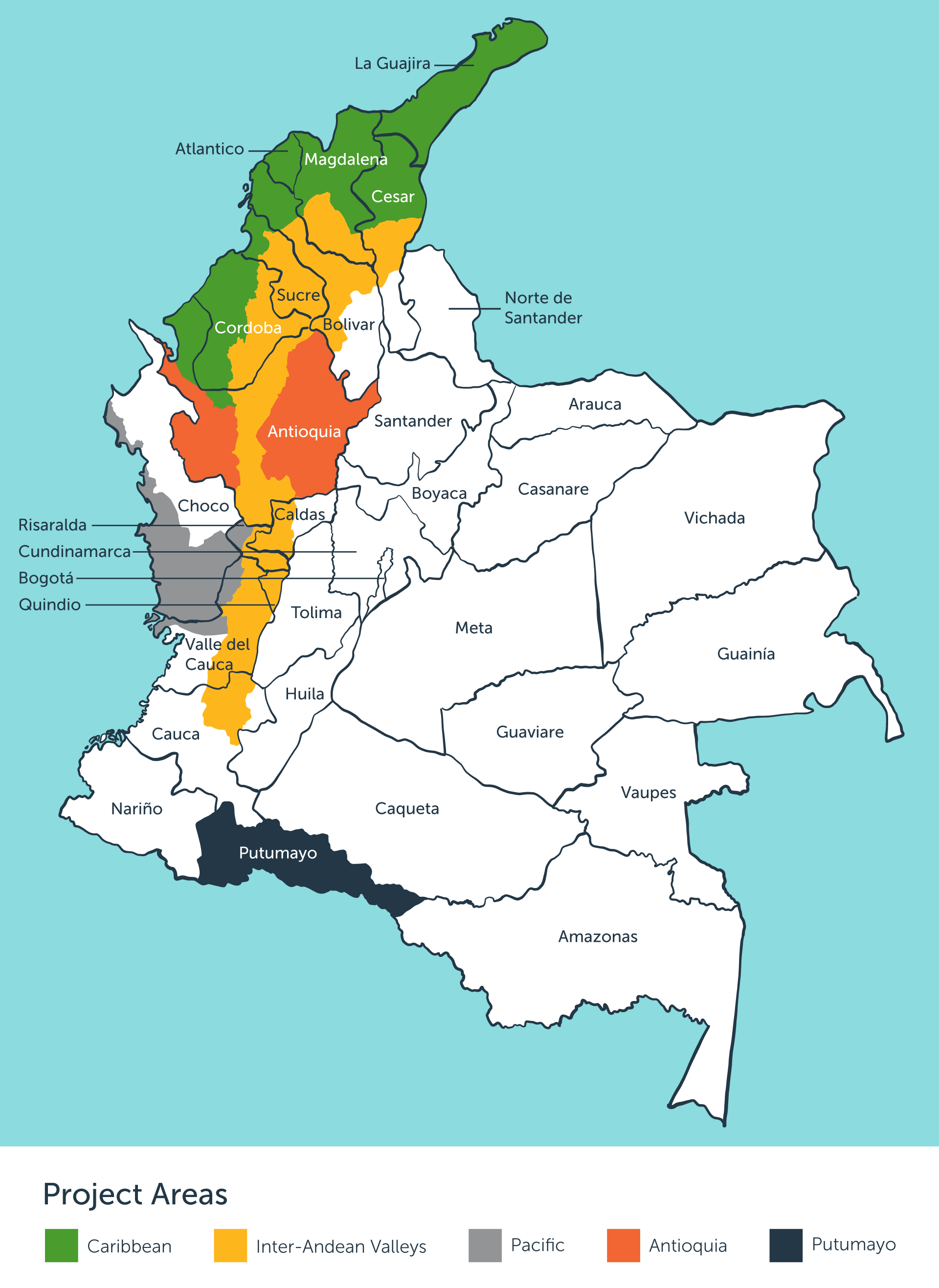